What Can I Say?

Day two of our journey to Florida is one of those days where I have to laugh...hard...because these are just the kinds of things that happen to us.

What I love about these kinds of things is that I get really excited at the opportunity to tell others and  hear their laughter.  My favorite response today?  "You need to go run over a homeless person, because your life is just too boring."  My most popular response?  "You need to write a book."

I don't know what I would write or that anyone would be interesting in reading, but given the level of awesome in the responses, I decided to pen today's fiascos here.

We left from Springfield, MO and had a 5hr 45 minute drive ahead of us.  As usual, we had to stop about 20 times just to get going, but once we were finally in our groove, Siri took us baha-ing down a lesser travelled road, if you will.  We had about a quarter tank left and the two little ones were snoozing, so I thought the winding trail would be good for us.  By about the 40 mile mark of backwoods Ozark mountain trails I was getting tired of going around the curves at zero miles per hour and we were pretty well out of gas.  I was praying we'd get to a gas station when a trailer-type box with a gas pump circa 1976 came into view.  I looked at the GPS and decided we might try for the next station, but *something* made me turn around and go back.

We pulled up to what I affectionately dubbed "Cletus' personal gas hole."  I walked in to pre-pay because I still haven't gotten cash and had to go to the bathroom.  When I opened the door, a wave of stale cigarette smoke stench punched me in the gut.  I proceeded.  Someone was standing at the counter, shootin' the dirt with Cletus (fyi: this was not his name, but I imagine it was probably Bubba.  I say this with all the love in the world.  Since living in Texas for so long, I love most of the Bubba's and even call my son Bubba) so I figured I'd relieve myself first.  The bathroom was my first indication that this was actually a personal residence, tiny though it were.  There was a nice porcelain tub in it.  On a tidy shelf in the corner I saw a lot of travel-sized toiletries with a sign.

"Showering peoples: these are for you."

When I finished I walked to the register while Cletus and his buddy ended their conversation.  I was about to gag at this point because the smoke I had let out was being replenished with a fresh cigarette.  I asked politely if I should pre-pay and Cletus cocked his head to one side, started fiddling with his ancient credit card machine and said, "Whatever you wanna do."

Oh.  My mind was trying to quickly figure if I wanted to walk BACK into this place or if I should just get it over with, but Cletus interrupted with, "But I got no way to stop the pump, so you just gon' have to catch it when it hits the dollar or come back."  That's when I decided not to pre-pay.

I put $50 in the tank because the gas here was pretty pricey compared to Leavenworth, and I hoped I might find a better price in the big city that had maybe 3 gas pumps to its name.  When I went back inside I tried to hold my breath, thankful I had not actually paid ahead, because I couldn't stop the antique pump before it hit 50.12.  As I approached the counter, Cletus gave me a half-smile and blew some smoke in my direction and said, "Ooops.  I forgot to tell ya....if you pay cash it'll cost less.  You gon' have to pay to use that card."  I explained to him that I didn't have any cash and he took his time digging up the charge for the privilege of using my debit card while I tried not to start hacking.

As I looked around I saw further evidence of personal living space...like the kitchen that was VERY clean amidst the rest of the very lived in station.  Cletus interrupted my thoughts again with a slow drawl that had a tinge of a laugh to it..."where y'all from?"  The implication in it made me laugh in spite of myself and I said, "currently, Leavenworth.  But we live all over."  He gave me a funny look as he tore the reciept off the machine and handed it to me to sign.  My head was buzzing from the nicotine and it took me much longer than it should have to sign my name.  I'm pretty sure my bank will be giving me a call about that one.  I took my reciept and wished him a good day.  In the car the kids and I cursed the god-awful smell we had accumulated on our clothes and hair (GraceAnne went in to use the bathroom while I pumped gas)

When we finally hit Arkansas, (good thing that *something* made us go back, we would have been stuck in the woods with no gas) I might have had a bit of a high and mighty thought in my head about ole Cletus, but God seems to always see fit to humble me pretty quickly.  We weren't far on the other side of the border when we came across a sign that said, "Maynard, AR 10 mi."  Maynard is my family name.  We are from Arkansas.  haha  I gotcha, Lord.  "Watch your gigglin' don't ferget yer raisin'."  The final nail in the humble coffin came when I told Allan the story and before I even mentioned Maynard, AR he said, "was it Uncle Cletus?" bahahaha

Later on, back at the ranch, the kids and I were more than thrilled when we finally got to a 3 horse town and all scrambled to the potty and attempted to find a snack.  After we got back on the road, as if on cue, Corbin chimes in, "I have to go potty again.  bad."  I blew him off a few times and looked for a gas station, but we were out of luck again.  He started whimpering and my foot started depressing the gas pedal a little more.  I'm not sure how fast I was going when the officer going west-bound saw me, but I know I was passing everyone and I was on my phone, so when he turned into the east-bound lane I knew it was all over for me and warned the kids.  Sure enough, the state trooper pulled me over.  By the time he came to the window I had my license and was working on my insurance card and Corbin was in a full hyperventilation.  I didn't even let the officer say a word before I blurted out, "I'm really sorry sir, but my son has to go to the bathroom and I was having trouble finding anything."  He seemed understanding.  As I fumbled with my insurance app, he talked to the kids and listened to Corbin's deep breathing techniques.  After he saw my proof-of-insurance he said he'd be right back and walked back to his car.

Corbin showed us his desperation in his next words.  "GO MOM, he's not by the window, just GOOOOO."  I explained that I could NOT take off away from the officer and then he started to sob.  I looked frantically around the car for SOMETHING he could pee in, because I couldn't just let him go on the side of the road with the trooper behind us.  GraceAnne found a water bottle that was only half full and dumped the water into Corbin's bottle (maybe we should be restricting a bit?  lol)  You can imagine that the next 3 minutes were filled with us helping get Corbin "situated" and looking back at the cop and telling Corbin to HURRY UP!  Before he comes back!!  When the boy finally finished, he handed me the bottle and I was hissing at him to hurry and get his pants back on before the cop came back.  When I turned around, (with a bottle of hot pee in my hand, dear God does it get better than this?) the officer was standing at the window again...

I had to swallow that pride down, hard.  I almost choked on it.  Here I am, on the side of the road in Arkansas, holding a bottle of my son's urine and getting a ticket for speeding.  The officer surprised me, though and said, "Ms. Doyle...if I give you a written warning, will you promise to TRY and slow down?  There's a full-service gas station right around the bend."

I thanked him profusely, of course, pee in hand and when Corbin was finally buckled up again we were on our way.  I don't think a person has ever been so glad to see a hotel as I was this evening.  Thank you, Jesus, for rest after insane days.

And now that I've shared our nutty story, I'm off to wash the smoke off me. 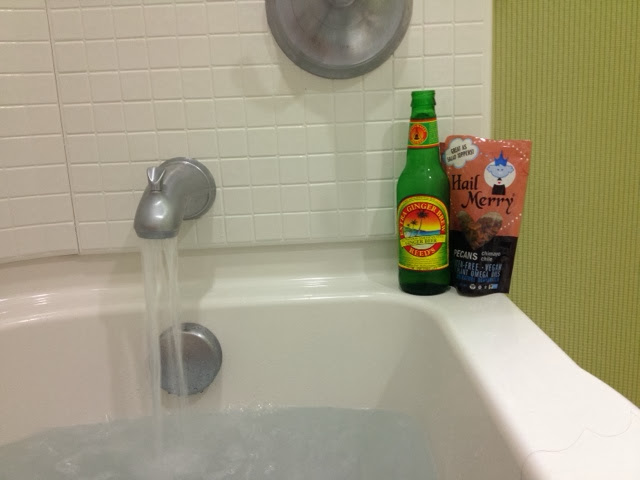 Hail Merry take me away !
What kinds of crazy things have you been pulled over for?  What was the most insane place you ever had to stop for gas/help?  What would you have done?
Posted by Tara at 10:47 PM No comments: Links to this post

A Paw Up for Violet

Blogs who Love our Blog